Media Release: The world celebrates the success of community action to protect forests. 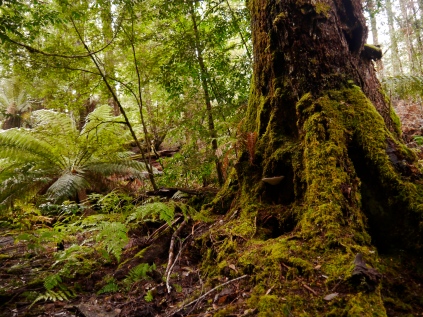 The decision today by the World Heritage Committee to approve the extension to the Tasmanian Wilderness World Heritage Area is testament to the power of the community, after decades of action to defend these forests.

The Observer Tree and the forest surrounding it as well as the site of Camp Florentine blockade are now World Heritage listed.

“On December 14th 2011 I climbed to the top of a tree in a threatened forest and said I would stay until the forest was protected. That forest is now World Heritage. It is thanks to the support from people right around the world that the forest is still standing and is now protected” said Miranda Gibson, spokesperson for Still Wild Still Threatened.

“For 14 months I watched over the forest every day with the hope that we, as a community, could defend those trees for future generations. Today, for that forest, we have achieved that” said Ms Gibson.

“Today I think of the wedge tailed eagle that I watched fly above my tree, whose habitat was once under threat and is now protected and of the Tasmanian devils who lived in the forest 60 meters below my platform who can now raise their young in peace” said Ms Gibson.

“Today we celebrate the protection of some of Tasmania’s most significant forests including the Tyenna, Weld and Upper Florentine. For six years the Upper Florentine Valley has been defended by Tasmania’s longest running forest blockade. This forest is still standing because the community took action and halted logging to protect the values of this ecosystem, that are now officially World Heritage. This Sunday the community will return to site of Camp Florentine to celebrate our success in ensuring these forests will be standing for future generations” said Ms Gibson.

“Thousands of people across the globe have been part of this global movement to protect Tasmania’s ancient forests as World Heritage. Right around the world people today are celebrating the power of community action and what we have achieved for Tasmania’s forests said Ms Gibson.