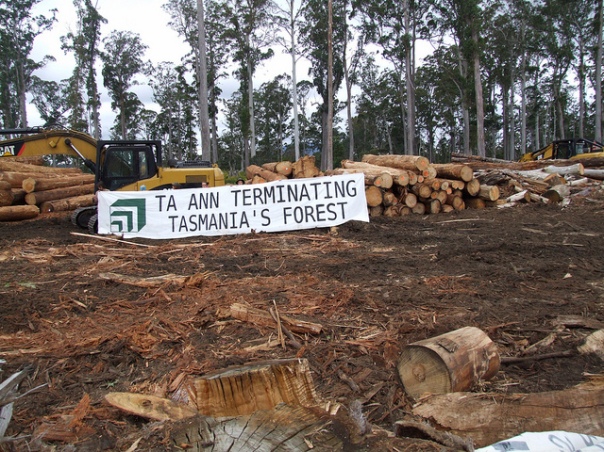 This 69 hectare logging coupe in Roses Tier was due for protection under the Intergovernmental Agreement. Like so many other high conservation value forests in Tasmania, it has been lost due to the failure of the government and industry to deliver on the promised moratoriums. Ta Ann’s wood supply was one of the key reasons that this coupe was subject to logging.1

This coupe was a forest of tall Eucalyptus delegatensis. It featured potential habitat for Tasmanian devils and spotted tail quolls.2 This includes areas of fallen logs, dense understorey and old wombat hollows, which may have provided shelter for these animals. This region has been listed as core range for the spotted tail quoll by the Independent Verification Report.3

There are four creeks within, or bordering the coupe. The coupe is also potential habitat zones for the north-east forest snail.4 This species is listed in the Regional Forest Agreement as a ‘Priority Species Requiring Consideration’. This is due to “slow recovery time from logging operations and perceived restricted habitat and environmental sensitivity.”5 This species is found living in leaf litter and the underside of fallen logs, feeding on fungi and detritus from the rotting logs. According to the Forest Practices Authority “The species is likely to be eliminated by clearfelling and associated hot regeneration burns” particularly because “may take at least 90 years following clearfelling and burning for the species to fully recover in regenerated forests.”6

The region that this logging coupe is situated in has also been identified as significant for priority flora. The verification reports indicated specific species within this region that would benefit from the formal reservation of this area. One of those species is Acacia pataczekii. This endemic Tasmanian shrub is listed as rare in the Tasmanian Threatened Species Act. Its population is restricted to eucalypt forest, mostly in north east Tasmania.7Protecting the proposed reserves would improve the reservation of this species by 52%.8

Another identified significant species is Barbarea australis. This herb is endemic to Tasmania and listed as endangered under the Tasmanian Threatened Species Act and as critically endangered under the federal Environment Protection and Biodiversity Conservation Act. Barbarea australis is known to occur in approximately 10 river systems extending from northern Tasmania to rivers flowing south from the Central Highlands.9

In addition the region that includes this coupe has been recommended for protection due to its diversity of eucalypt species.10 Protection would increase the bioregional reservation of E. rubida and E. pauciflora, reserve geographical and ecologically marginal populations of endemic species E. archeria and increase the representation of E. viminalis.11

Although this coupe has sadly been logged, it is vital that the area is regenerated and included with the surrounding forests as part of Tasmania’s proposed formal reserves. The regeneration of this coupe will help to maintain regional connectivity and help protect the endangered, rare and threatened flora and fauna found in this area of north east Tasmania.