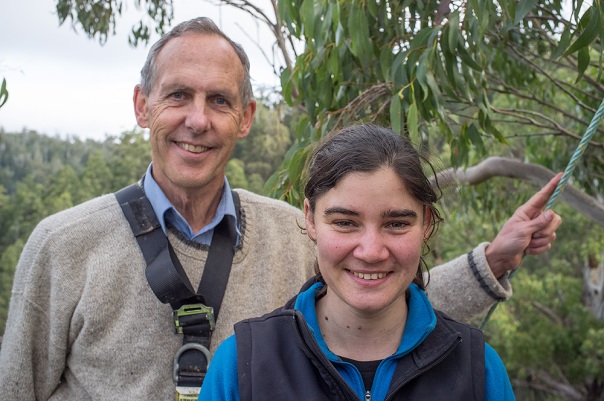 On the day that that IGA process was due to deliver an outcome for Tasmania’s forests, long time environmentalist and former federal senator, Dr. Bob Brown, visited Miranda Gibson’s tree-sit in the threatened Tyenna Valley. Dr. Brown made the 60 meter ascent to the reach the platform on which Ms Gibson has been living for the past seven months. The pair discussed the forests and the future of Tasmania, over a cup of teatop tea.

“Today I am making a renewed commitment to my stay in the Observer Tree. There was some hope that yesterday a deal would be reached between industry and environment groups that would bring an end to the logging of high conservation value forests. However, there has been no such agreement so far. This means that world heritage value forests are still under threat and subject to logging right now. I will therefore continue my treetop vigil to speak up for these forests and the species that call them home” said Ms Gibson.

“The visit from former senator Bob Brown has strengthened my resolve and commitment. He brought with him a message of support not only from himself, but from people all around Australia who want to see these forests protected. It was an inspirational visit and it has given me the courage to continue my efforts in the face of uncertainty about the progress of the forest talks” said Ms Gibson.

Meeting with Bob Brown reminded me of how many people have spent their lives tirelessly working towards the protection of these forest. Over the past decades Tasmania has lost significant tracts of forest and now it is time to ensure that our remaining high conservation value forests are protected” said Ms Gibson.

“Today I want to renew the vow I made seven months ago when I first climbed this tree. I want the world to know that I am not going anywhere until this forest is safely protected from logging” said Ms Gibson.