← One week to go!
Poster for Global Day of Action →

It’s subtle, but I can feel it every time. The way I slightly tense up each time at the sound. In reality it’s actually that moment of silence where it happens. In between the chainsaw cutting out and… just waiting for the crack, the crash, the fall of the tree. Sometimes I don’t even realise I’m aware that it’s happening. I guess when it goes on all day, it becomes back ground noise. But I never really stop hearing it, I never stop feeling that slightly tense moment in each of those silent seconds before each tree falls. I guess this is what I am here for – this is the observer tree and I am the observer. My observations so far… trees are falling everyday in these forests. I hear them falling in Tn 42A, the coupe adjacent to me. But I know that these are not the only ones. They are falling in huge numbers every minute of every day right across the state, right across those 430,000 hectares that were promised protection.

Not only does logging continue, but a report released today has shown that logging has actually INCREASED in the areas that were meant to be protected!

As the report points out Forestry Tasmania (FT) were actually meant to implement a moratorium close to a year ago now. This was meant to cover 572,000 hectares and be in place by March 15th 2010. Yet logging continued, despite the Tasmanian Environment Minister writing to FT and formally directing them to reschedule coupes, in line with the agreed moratorium.

In September 2010 FT were given 12.5 million dollars of tax payers money in order to fund their work in rescheduling logging out of the proposed new reserves. They took the money. But the logging continued!

Then recently we saw the so-called “conservation agreement” signed. Instead of protecting this forest, this locked in continued logging.  As the new report explains the agreement allows FT to “log its planned 1,900 hectares within the new forest reserves during the first half of 2012. This means the Conservation Agreement protected only those forests that Forestry Tasmanian had not included in logging plans. In other words, it provided temporary protection for forests that were not going to be logged and allows business as usual logging of contentious areas“

So where has this whole process lead to, for the forests? Well, the report confirms that FT’s “logging operations within the 430,000 hectares are greater than even before it’s wood supply obligation was halved and before the conservation commitments given by the Premier and Prime Minister”

In their original plan they would have provided 36% of the high quality wood saw log supply for the area nominated protection. Yet, instead of rescheduling to source this elsewhere, as the IGA directed, they are now sources 44% of the wood from the area that should have been protected. And the figure was as high as 50% in november and december 2010.

In their original plan FT had less than a quarter of the coupes across the state falling within the 430,000 hectares nominated for protection. Now? Instead of decreasing the amount of logging in the area meant to be protected by a conservation agreement…. almost 40% of the state’s logging coupes are now inside that area ear-marked for protection.

This becomes even more ridiculous when you take into account the fact that the demand for wood has actually decreased due to the exit of Gunns Ltd, who were the holders of a contract for 300,000 m3 of wood annually. This exit basically halved the amount of wood required for the industry. Yet, FT have increased the amount of logging in high conservation value forests.

All those numbers can get a bit confusing. So, here it is in a pie-chart (from the ENGO’s report): 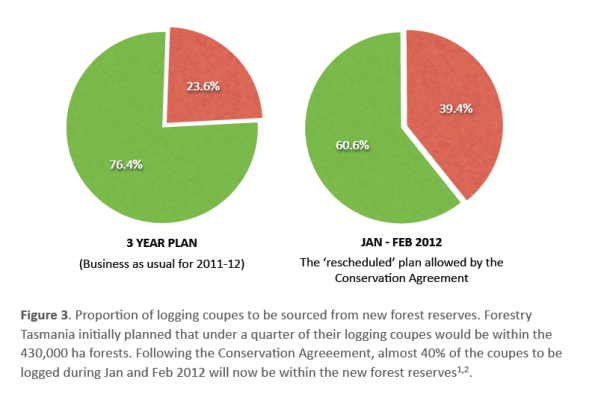 The government really does have a lot to answer for! To promise protection of an area and then allow it to be logged at an increased rate is an absolute scandal!

It is even more critical now that I am here, in this tree, exposing this ongoing logging. The government and Forestry Tasmania cannot be allowed to get away such an abuse of people’s trust, misuse of public money and wanton destruction of the forests.

Please join us next Wednesday in a global call for these forests to be protected.

Posted on February 9, 2012, in Daily Blog. Bookmark the permalink. 2 Comments.

← One week to go!
Poster for Global Day of Action →